It is useful to remember that most books, even sacred books, contain errors. As magicians we are taught to examine everything with a discriminating eye. So we should not be surprised to find mistakes that have crept into treasured magical grimoires -- mistakes that have also found their way into the teachings of the Golden Dawn.
One such example is the name Khamael: the Archangel of Geburah, whose name means "the Severity of God". Khamael is the protector of the wronged -- the Avenging Angel who pursues those who break both human and universal laws. He is associated with Divine justice and severity. Khamael is sometimes called "The right hand of God" -- meeting out justice in order to restore a state of balance throughout the Tree of Life. He controls the aspects of burning and destroying in order to purify and preserve.
William Grey erroneously stated that the root of this name was khab, which meant to suffer, to feel pain or make war. However, the original Archangel of Mars was Samael -- a name that MacGregor Mathers changed to Zamael in order to avoid connotations with the Qliphotic Samael. When the Qabalists began to assign Archangels to the Sephiroth, someone attributed a list of Planetary Archangels to their corresponding Sephiroth, and the martial Samael was naturally assigned to Geburah. At some point this list was copied into Greek. In late Greek writing, the letter Sigma (the first letter in Samael) came to be drawn in the shape of a "C." Still later, when the Greek list was copied into Latin, the copist made the error of transliterating the Greek name of CAMAHL as "Camael" rather than "Samael." Even later, someone (perhaps a member of the Golden Dawn) back-transliterated Camael as kaph mem aleph lamed and thus was Khamael born. And although it originated as an error in transliteration, it does help magicians destinguish between Samael, Archangel of Evil, Zamael, Archangel of Mars, and Khamael, Archangel of Geburah.
Other mistakes: The name of the Archangel of Venus, Anael, has often been wrongly given as Hanael through confusion with Haniel, Archangel of Netzach. The name of the Archangel of Sagittarius, Adnakhiel, has been frequently misspelled as Advakhiel, through a scribal error mistaking Hebrew Nun for Vav. The same error also occurred in Renaissance Latin typesetting, where the n of Adnachiel could easily be set upside-down as a u, producing Aduachiel. Finally, the correct name of the Angel of Elemental Fire is Ariel ("the Lion of God"), not Aral. An error in Agrippa was long perpetuated in the Golden Dawn manuscripts, in which the two names Ariel and Aral were swapped. This confusion was perpetuated because the four Rulers of the Elements have generally not been recognized as the names of Orders of Angels. Seraph, Cherub, Tharsis, and Aral (Erel) are simply the singular forms of Seraphim, Kerubim, Tarshishim, and Erelim.
There has also been a lot of confusion regarding the Divine Hebrew names that are to be painted on the Four Elemental Weapons of the Zelator Adeptus Minor. According to Wang's book The Secret Temple, the names on the implements are: Earth Pentacle -- Adonai ha-Aretz, Air Dagger -- Shaddai E Chai, Water Cup -- Elohim Tzabaoth, and Fire Wand -- YHVH Tzabaoth. These are the Divine names given in the Outer Order Grade Ceremonies relating to the Sephiroth of Malkuth, Yesod, Hod, and Netzach, which also have elemental associations.
However, the correct Divine Hebrew names of the Elements for the Inner Order are actually given in the consecration rituals of these same implements (see Regardie, The Golden Dawn, 324). They are: Earth Pentacle -- ADONAI,  Air Dagger -- YHVH, Water Cup -- EL, and Fire Wand -- ELOHIM. These are the Divine names intoned in the SIRP and they relate to the Sephiroth of Malkuth, Tiphareth, Chesed, and Geburah. They are also the Divine names that should be painted on the four elemental weapons of the Z.A.M. (Kathleen Raine's book Yeats, The Tarot, and the Golden Dawn shows a picture of William Bulter Yeats' Earth Pentacle inscribed with the Divine Name Adonai -- not Adonai ha-Aretz.
Posted by Tabatha at 7:17 PM 4 comments:


Apocalyptic movies starring Christopher Walken notwithstanding, the number seven is very important in esoteric lore. Hippocrates tells us: “The number seven, because of its occult virtues, tends to bring all things into being. It is the dispenser of life and the source of all change.” This is confirmed in the Golden Dawn’s teachings wherein the number seven, corresponding to the planet Venus, is the gateway to initiation—as the Venus wall is the actual doorway into the seven-sided Vault of the Adepti.
Not only does the number seven correspond to the seven planets of the ancients, it also corresponds to the Seven Palaces of Assiah. The Golden Dawn's diagram of the Seven Palaces of Assiah provides magicians with an important tool—a way to divide the ten Sephiroth of the Tree of Life into seven sections which can then be assigned to the seven planets.
Golden Dawn students are made aware of the importance of the number seven in a beautiful description of the Seven-branched Candlestick or Menorah in the Zelator Grade. And it is this description which inspired a ceremony I created, called "The Outer Order Ritual of the Seven-Branched Candlestick."
The ritual employs a diagram with planetary-colored candles placed thereon. The heptagram used is the 7/3 heptagram, also called the acute heptagram or the great heptagram. The Golden Dawn describes it as the Star of Venus reflected from every fourth point. The planets are placed around the heptagram in the order of their apparent speed of movement in the heavens, along the unicursal line in the order of days of the week. The Officers invoke the powers of the seven planets by lighting the colored candles on the heptagram diagram following the Hebrew order of the days of the week: 1) Hierophant: Sol.  2) Hegemon: Luna.  3) Hiereus: Mars. 4) Keryx: Mercury. 5) Stolistes: Jupiter. 6) Dadouchos: Venus. 7) Phylax: Saturn. 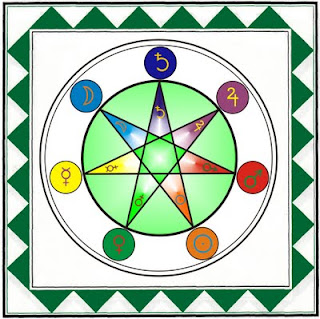 For the purpose of this ceremony the Hierophant represents Sol (the direct light of illumination); Hegemon represents Luna (the reflected light); Hiereus represents Mars (power and severity); Keryx represents Mercury (communication); Stolistes represents Jupiter (water and expansion); Dadouchos represents Venus (fire and passion); and Phylax represents Saturn (limitation and darkness).
At another point in the ritual the officers invoke the Sephirotic Powers associated with the seven Palaces of Assiah. To do this, they each take one of the colored planetary candles and light one of the white candles of the Menorah following the Chaldean or Sephirothic order [the Lightning-flash order] of the Tree of Life: 1) Hierophant: Three Supernals.  2) Stolistes: Chesed.  3) Dadouchos: Geburah. 4) Hegemon: Tiphareth. 5) Phylax: Netzach. 6) Keryx: Hod. 7) Hiereus: Yesod/Malkuth.
The officers chosen to represent the Sephirotic Powers of the Seven Palaces are as follows: the Hierophant represents the Three Supernals (the highest); Stolistes represents Chesed (water); Dadouchos represents Geburah (fire); Hegemon represents Tiphareth (the center, reflecting the Supernal Light); Phylax represents Netzach (the gateway of initiation); Keryx represents Hod (intellect, communication); and Hiereus represents Yesod/Malkuth (manifestation, matter). This arrangement also allows the 3 Middle Pillar Officers to occupy the Pillar of Balance.
"He has loved and blessed the number seven more than all things under His throne."
"The Outer Order Ritual of the Seven-Branched Candlestick" is found in Hermetic Virtues Magazine Special Edition: Book of Rituals 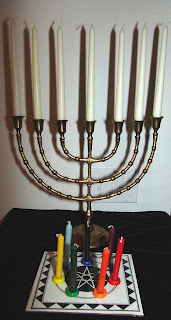 Posted by Tabatha at 5:58 PM No comments: