What is it about the practice of magic that makes fundamentalists condemn it so?
Beyond the obvious fact that humans often denounce what they do not understand, there is also the undisputed fact that magical practice flies directly in the face of the fundamentalist’s agenda: to proselytize, to convert, to persuade as many people as possible to think the same way, pray the same prayers, worship the same deity, to attend the same churches, listen to the same pastors, and fill the same coffers. For centuries, Western theocrats have based their agenda on Constantine’s fourth-century approach: One Emperor, One Empire, One God, One Religion. One unified bureaucracy ruling it all. One particular set of Christian beliefs was exalted and all others condemned. Deviation was discouraged, to put it mildly. Other forms of worship were exiled, died out, or went underground. This was the religious reality of the West for centuries until cracks started to appear in the theological door, nailed into place by Luther’s hammer.
New Christian sects soon flourished, but most also embraced Constantine’s approach: there was one right set of beliefs and all others were wrong. One right way to worship. Each sect taught that it alone had the One True Way, and all other sects were deceived, blinkered, misinformed, or bound for hell.  Adherents were taught that following the instructions of the church (whichever sect it happened to be) would result in happiness and salvation. Following a different church could result in damnation and eternal misery. Such was the kindling that sparked religious conflicts such as the 30 years War and the Inquisition.
With the Renaissance came a resurgence in classical knowledge and philosophy. The Age of Reason and the Age of Enlightenment followed and built on the scientific advancements of preceding ages. In ways that had never been previously possible, more and more people began to examine their deepest-held beliefs concerning God, religion, and humanity’s relationship to the Divine. Influential thinkers of the day began an intellectual revolution against the yoke of religious orthodoxy—sometimes quietly, sometimes vociferously. As evidenced by such documents as Pope Leo XIII’s “Human Genus: Against Freemasonry and Spirit of the Age” (1884),  which condemned such ideas as “democracy”(!)—power over individual human lives gradually slipped away from the church, which kicked and screamed at every lost bit of control and authority.
It was against this backdrop that the 19th century “Occult revival” was born, ushering in a proliferation of esoteric societies and such thinkers as Eliphas Levi, Helena Blavatsky, W. Wynn Westcott, S.L. Mathers, Aleister Crowley, Arthur Edward Waite and others. At the heart of this revival was the study of magic; a yearning for liberation of the human spirit through arcane knowledge.
Organized religion tends to limit access to the supernatural world within the bulwark of a formalized theology, and the faithful are strongly encouraged to remain within that framework. In magic, however, the individual is encouraged to experience the supernatural realms for him or herself. While religion often focuses on the group experience, group-think and group interdependence, usually with a single religious leader or small group of leaders shepherding their flock, magic emphasizes the individual experience, independent thought, and belief that is based on personal revelation of the Divine.
However, the advantages of group work are many. Mystery schools past and present are founded by individuals motivated by any number of reasons, but the best are usually inspired to teach, whether by inner planes contacts or divine muse, and to offer a useful curriculum of esoteric work that can guide the student step-by-step through the magical/alchemical process of purification, consecration, and union. To be an Initiate means that one is accepted into an inner circle whose teachings and rituals are meaningful only to other members of the group who share this common experience.
Admittance to such a group confers a sense of fellowship and belonging, of receiving arcane information, and of having been uplifted through the disclosure of divinely inspired wisdom.
This does not mean that the magician simply trades in one congregation for another. A magical order is not a religion and is not designed to take the place of religion, although religious symbolism is often used in ceremonies as a catalyst to stimulate the alchemical process of self-evolution. The rite of initiation is meant to purify the candidate and prepare him or her to receive the teachings of the group, which can aid and support one’s personal process of illumination.
Ultimately, however, magic is a process of liberation. The Initiate is always in control of his or her own destiny. Spiritual attainment, whether within or without a magical group, still depends on the individual will, perseverance, merits, and character of the student.
Posted by Tabatha at 6:12 AM 2 comments:

The Divine Pymander of Hermes Mercurius Trismegistus in XVII Books was published in 1650 by John Everard. Translated from Marsilios Ficino's Latin translation of 1471, Everard's work represents the first English translation of the Corpus Hermeticum (the "Hermetic body of writings"), the foundational documents of the Hermetic tradition. The Pymander (Ποιμάνδρης) is one of the chapters in the Corpus Hermeticum. It means "Man-Shepherd," alluding to God as Divine Mind, and in another sense as "the Good Shepherd" or "Shepherd of Men."  Dr. W. Wynn Westcott included the Everard version in his Collectanea Hermetica series, published in 1893.
Over the course of four decades Westcott published a seemingly inexhaustible stream of articles for Masonic journals, books, papers, translations and commentaries on Hermeticism, Alchemy and Qabalah. Much of his work directly benefited his students and fellow Initiates within the Golden Dawn. It should come as no surprise then, that certain words and phrases from Everard's The Divine Pymander of Hermes Mercurius Trismegistus in XVII Books sound very similar, if not identical in some instances, to language used by Westcott and his companions. Echoes of The Divine Pymander reverberate throughout the initiation ceremonies of the Golden Dawn. For example in the 0=0 grade the Hiereus tells the Neophyte that:
"The Seed of Wisdom is Sown in Silence and Grows in Darkness and Mystery."
In the Seventh Book, called His Secret Sermon in the Mount of Regeneration, and the Profession of Silence, Hermes Trismegistus tells his son Tat:
"O Son, this Wisdom is to be understood in silence, and the Seed is the true Good. [...] Wherefore this is not taught, but hid in silence."
In another example, the "Adoration to the Lord of the Universe" from the Neophyte Ceremony shows a sentence taken verbatim from The Divine Pymander:
"Holy art Thou, Lord of the Universe.
Holy art Thou, whom Nature hath not formed.
Holy art Thou, The Vast and Mighty One.
Lord of the Light and of the Darkness."
Compare this to a passage from The Pymander:
"86. Holy is God the Father of All Things.
87. Holy is God Whose Will is Performed and accomplished by His Own Powers.
88. Holy is God, that Determineth to be Known, and is Known of His Own,
or Those that are His.
89. Holy art Thou, that by Thy Word hast established all Things.
90. Holy art Thou of Whom all Nature is the Image.
91. Holy art Thou Whom Nature hath not Formed.
92. Holy art Thou that art Stronger than all Power.
93. Holy art Thou, that art Greater than all Excellency.
91. Holy art Thou, Who art Better than all Praise."
(Except from the "Foreword to the Divine Pymander," from the book Collectanea Hermetica Volume II: The Pymander of Hermes, soon to be published by the Golden Dawn Research Trust.)
Posted by Tabatha at 6:23 PM No comments:

The Outer Order of the Golden Dawn has been described as “Osirian” in essence because the Egyptian God Osiris, embodied by the initiating Hierophant, plays a central, critical role in the magical work of the Neophyte Hall and the spiritual alchemy of the Outer Order in general.
The equilibrated aspect of Osiris is shown in the Enochian system, often thought of as the pinnacle of the entire Golden Dawn system of magic. This is particularly evident in that area of the system dealing with the truncated pyramids corresponding to the various letter squares on the Elemental Tablets. An Enochian pyramid that is completely balanced in its elemental composition is known as an "Osiris Square." In his paper on "The Pyramid Gods and Their Attribution," S.L. Mathers describes Osiris as the God who:
"...Ruleth above when of the Four Triangles each is a different Element. So that all four elements are united in one square, for he representeth the Spirit ruling in the Four Elements equally balanced."  (Regardie, The Complete Golden Dawn System of Magic, page 96, Volume 10.)
Within the Order's system of Enochian Chess, the name of Osiris is even used to describe the process of becoming elementally balanced—a process the Order called Osirification. (Regardie, The Complete Golden Dawn System of Magic, page 107, Volume Ten.) Although this term was used to describe certain Enochian pyramids that were almost, but not quite, Osiris Squares (meaning they had three out of the four elements necessary in order to be classified as an Osiris Square), the term Osirification could well be used to describe the Initiate who is undergoing the process of elemental equilibration through the alchemical/theurgical work of the Golden Dawn. Osirification is the process of purification, consecration, and union.
This process, if correctly undertaken, can lead to the psyche of the Initiate mirroring that of an Osiris Square, with the four elemental portions of the psyche in balanced disposition, ruled by the governing quintessence of Spirit. Within the traditional Golden Dawn system, Osirification is the embodiment of the theurgic process of self-realization and wholeness. 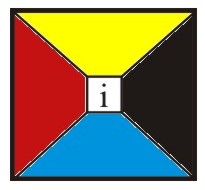